Way back what seems like years ago I posted my Day Zero list and explained what Day Zero is all about.

One of the things on my list was “Go to a musical” and last week, we crossed that one off.

WICKED came to DPAC again this month (it showed here two years ago as well) and Andrew and I went to see it.  I really love the Durham Performing Arts Center (DPAC), they do a great job making the place clean and comfortable and fun to visit.  And, any place that allows (encourages, even) me to take a glass of wine into the show with me has my vote for a fun evening out.

I’d gone with a friend two years ago to see WICKED, and this time Andrew came along.  The show was just as incredible as I’d remembered.  Andrew wasn’t too thrilled about going in the first place, but he really enjoyed it.  If you haven’t seen it, you should.  It’s funny (really!), it makes me cry, it makes me happy in that feel-good-movie sort of way.

I’ve had the songs playing through my head since last week (FIERO!!!!) so it’s been fun to extend the experience a little that way.

I’m not going to apologize for my long absence from this blog.  I’ve said it before, this is for me, so I’m not going to feel any sort of guilt about my life getting busy and not spending as much time here.

There’s also not a real point to this post, I figured I’d just brain dump some of what’s gone on in my life since March when I last posted.

So, we made it through tax season.  Andrew survived another busy season, and our home and lives didn’t fall apart in the process.  We owed lots of taxes this year due to some poor planning, but we’re planning better for next year.

NC voted at the beginning of May for a Constitutional Amendment defining marriage.  I’m disappointed in our state.  We need to do more to educate people on legislation that they’re voting on.  There were a lot of people who said after the vote that they didn’t fully understand the amendment.

Emma was sick last week.  She’s way better now, but last week she was a pitiful mess.  She spent Wednesday at the Vet’s office (we LOVE our vet) and has a collection of medications now.  She’s almost back to herself.

This weekend Andrew and Emma and I went up to Richmond for our friend’s birthday.  Another friend also came up, and we had a great time hanging out with them.  On Saturday, we went to the River Rock festival on the James River in Richmond and we got to see the Sylvan GO camper trailer that I’ve wanted to see in person.  And y’all, this thing is as cool in person as it looks in pictures.  I figured that they probably used a really wide angle lens to take their stock photos, and that it wouldn’t be that big.  But I was wrong, it’s really that big.  Very cool, I want one, but I also want the time and energy to use it.

Andrew also survived spring semester of Grad school, and summer classes are well underway.  He’s only taking one class this summer, and I think we’re both ready for the break that begins at the end of June.

This coming weekend includes the 2 year anniversary of my mom’s death.  That day is also Andrew’s birthday.  I don’t know yet what our weekend plan is, it’s a hard one to plan.  We want to do something with my dad, but I also don’t want to totally monopolize Andrew’s birthday weekend.

My garden is growing, except my bell peppers aren’t doing well.  I can’t really figure out why they’re not growing.  The plants are still about 8″ tall, but they’re flowering.  Hopefully they’ll shoot up soon.  My squash and tomatoes and herbs are doing really well.  Even our lettuce and spinach is still doing well.

not much outside makes me shudder (warning, there’s a photo of a snake in here)

Andrew and I have been out working in the yard this morning.  Emma and I are inside right now while Andrew takes care of a few unsavory yard visitors.

Let’s get one thing out there before you go jumping to conclusions.  I know that snakes and spiders and all manner of bugs and critters are important to the vast ecosystem.  If I find a spider in the house I usually just toss it outside.  I hate to kill them.

But, those three black widows out there? They had to go.  It’s different when they’re aggressively poisonous and living where I like to garden and Emma likes to play.  If we were out hiking and found them in the woods, I’d leave them be.  Well, actually I’d probably get closer to them then people usually think is acceptable just because I think spiders are beautiful and fascinating.

But one thing that I’m not interested in seeing, up close or otherwise? This guy:

Tagged as Andrew, Emma, outside, snake

This is our puppy, Emma. 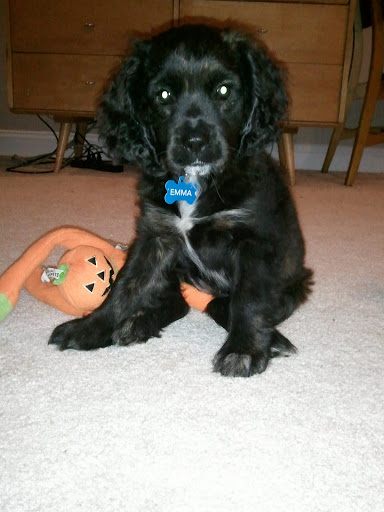 Emma is 12 weeks old.  She’s a cocker spaniel and lab mix.  Tonight we went to the second week of puppy class at our local Petsmart.  Last week she did really well with her “sit” and “here” and “spin” and “watch me”, this week is going to be a lot more work for us (and by “us”, I mean mostly me and Andrew).  Learning “Loose leash” walking is hard.  It’s frustrating for us, frustrating for Emma, involves lots of starting and stopping and getting tangled in the leash and lots and LOTS of treats.  The poor girl has a stomachache after tonight’s class.

We’ve had Emma right at a month, and she is so much fun.  A puppy is a challenge, we knew that before we got her, but she’s such a fun challenge.  So far (knock on wood) she hasn’t torn up anything except some junk mail and a roll of paper towels.  I know the “chewing” stage will come.  Hopefully my shoes will survive.

Andrew couldn’t come with Emma and me to puppy class tonight, he had his own classwork to do.  He started graduate school a couple weeks ago working towards his MBA (and from there, his CPA license).  Lately I’m feeling like we’re never going to get to a point in our lives where we can just enjoy what we have and each other without working towards some goal.  But then I talk to my friends who are in a place like that in their lives and it just seems so boring.  It makes me thankful for all that we have, challenges and all.